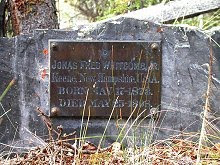 “In May 1898, Whitcomb and A. P. White, of Houghton, Massachsetts, went ahead to clear a trail from Tutshi Lake to Windy Arm. On the 25th, while leaning over to start a rock rolling down the hill (possibly during a hunting excursion), Whitcomb’s revolver slipped out of its holster and fell to the ground, discharging it. The bullet hit Whitcomb in the chest, killing him immediately.

On May 27th, he was buried in a Masonic ceremony at the south end of Windy Arm. His father sent a brass plaque for the grave, and it was mounted on a piece of slate. His death was briefly reported in the July 2, 1898, edition of The Klondike Nugget.

There appears to have been two other burials beside Whitcomb – right beside on the left is a slate marker with “H. M. H.” chiselled into a piece of slate by the same hand as the initials “J. F. W. Jr.” on the back of Whitcomb’s slate marker, while several feet to the right is an apparent exhumation. The 1898 diary of Stewart L. Campbell reports that on Monday, May 9th, 1898, “a Mrs. Howe [was] buried at end of lake. 72 years old”, and on May 15, “3 men drowned around the point.” He also reports that he took a photos of the graves at the south end of the lake, so the deaths he reports are possibly related to this site.

The graves are accessed from the South Klondike Highway – there is lots of room to park at the south end of Windy Arm . There is no trail, and you have to wade across two creeks (waist deep at mid-summer water levels) and crash through the forest to avoid lakeshore cliffs.”