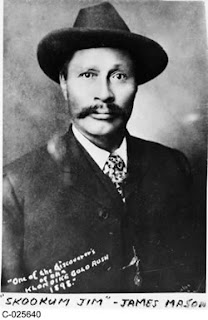 Tagish-Tlingit packer Jim Mason or Keish which meant “Lone Wolf”, was also known as “Skookum (the Chinook term for strong) Jim” for his feat of carrying 156 pounds of bacon over the pass in a single trip. As a young man he worked as a packer, carrying the equipment and supplies of early prospectors over the mountain passes from the seacoast to the headwaters of the Yukon river. It was while doing this that he met Carmack, and the two formed a partnership that included Dawson Charlie as well.

Skookum Jim, his sister Kate Carmack and her husband George Carmack as well as Dawson Charley discovered gold at Bonanza Creek in the Yukon. This eventually led to THE GOLD RUSH which affected the entire world.

Jim was part of the Carcross Tagish band born in either Carcross or Dyea about 1856. He died on this day, July 11, 1916 in Carcross of a kidney ailment or Bright’s disease at the age of 60.

One Reply to “Skookum Jim Mason”