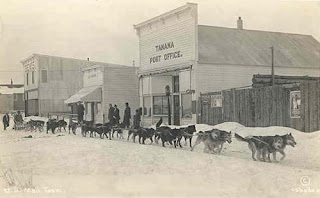 Marshal Daly was the Special Marshal appointed to Skagway after Marshal Rowan was murdered in February 1898. Daly was here in April, May and June 1898 and prosecuted Soapy Smith in an assault case in June.

Daly achieved some notoriety in 1897 when U.S. Deputy Marshal William C. Watts was shot and killed on Admiralty Island on September 1, 1897 whiled serving a warrant, (he was the first lawman killed in the line of duty in Alaska).
Hiram Schell and William “Slim” Birch, the murderers, wounded three other lawmen. They escaped but were apprehended soon after with the help of the U.S. Marines and a bunch of outraged volunteers.
The Assistant District Attorney who prosecuted the case was our Alfred J. Daly. Despite his good efforts in that case, the jury found the men not guilty saying the Marshals had not adequately identified themselves before the attempted arrest. Governor John Brady was horrified and compared the decision to let them go to the outrageous things happening in Skagway with the Soapy Smith gang. Perhaps that is why he sent Daly to Skagway.

Alfred James Daly, died on this day, August 6, 1912 in Tanana Alaska, he was 39 years old. His remains were taken to Nome for interment. Pictured above is Tanana around the turn of the century.