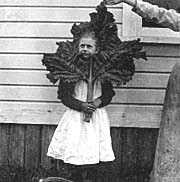 Mr. Miller came to Skagway around 1912 and then worked for White Pass as an auditor by 1915. He was born on this day, September 2, 1873 in Canada but by the 1910 census he was living in Maryland, his parents were from Germany. He registered for World War One while here and was still here in 1923. During the Crash he lost everything and was later seen on the streets of Vancouver begging.

So apropos of nothing, here is a picture of a girl wearing a rhubarb leaf.