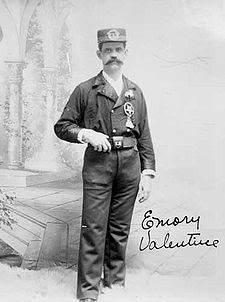 Mr. Valentine was born in 1858 in Dowagiac, Michigan. He first opened a jewelery store in 1895 in Juneau. He would have built a jewelry store in Skagway, but he faced competition from Herman Kirmse, a well-known jeweler. In 1897 he built and was co-owner of the Sylvestor-Valentine wharf where Soapy and Frank Reid were shot. He also owned the Princess Saloon in Skagway in 1898. He died on this day, September 14, 1930 at the age of 72 in Juneau and is buried in the Evergreen Cemetery.