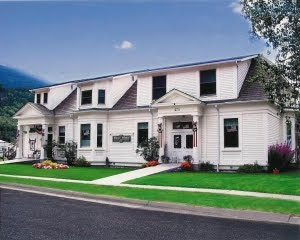 Born in 1862 in Texas, Mr. Guthrie came to Skagway in the gold rush. By the spring of 1898, he owned the Board of Trade Saloon.
“A shrewd saloon man could make a mint selling liquor, running gambling tables and offering female entertainment upstairs or in the alley behind his place, all of which Mr. Guthrie did. He quickly reinvested his money in Skagway’s real estate, buying up property as soon as it hit the market. By 1900, Guthrie was building the most expensive home in Alaska, now known as the White House on Eighth Avenue, costing $10,000 to build.. He was on the first three city councils of Skagway”

Guthrie married Abbie Atkins in 1901 in Salado, Texas, the daughter of a Baptist minister and his childhood sweetheart. They returned to Skagway but left in 1908. Lee Guthrie died on this day, September 20, 1934 in Stockton, California.