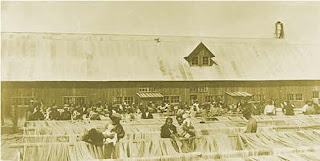 Frank Poindexter was the Justice of the Peace in Chilkat between 1887-1891.
He was born in 1842 in Pennsylvania. He moved with his wife Anna and his son Theodore to Alameda, California in the 1870’s and was a bookkeeper there. Seeeking his fortune, he came to Alaska in 1887 with Theodore and worked as the Superintendent of the Chilkat Cannery (seen above where women are laying out nets). This cannery was reportedly blown down in 1891.
Poindexter was also Supt. of the Pyramind Harbor Packing company. The Pyramid Harbor cannery was on the western side of the Chilkat Inlet and was built in 1883 by the Northwest Trading Company. This cannery burned in 1889, but was rebuilt at once and a pack was made that year. This cannery packed 1000 cases of fish per day and in 1896 employed over 100 people in the cannery (many of whom were Chinese) and over 200 fishermen both native and newcomers. Cannery fishermen used large gill nets and some purse seines. A fleet of steamers, transport ships, lighters, riverboats, and skiffs were also used in cannery operations. The average redfish (sockeye) catch from 1894 to 1898 was 300,000 per year.

In 1890 Poindexter was appointed as Postmaster of Chilkat, Alaska.
Poindexter’s position as Justice of the Peace was cited several times in the Alaska Boundary Commission report in 1903 to help determine the occupation of the area by the U.S. during those years.