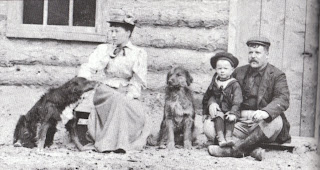 Inspector Strickland of the NWMP was born on this day, November 2, 1868 in Ontario Canada. IN 1898 he was in charge of the Canadian border station at White Pass. Strickland was a big, beefy man and, judging from the photos taken of him, he tended not to wear the standard NWMP uniform. According to his disapproving superior, Inspector Charles Constantine, Strickland was a fun-loving person, “what is generally known as a good fellow” with “a taste for low company [and] a decided fondness for drink.”
Strickland was accompanied to the Yukon by his wife Tannis and their son Roland (seen above); his daughter Frances was born at Tagish Post in 1899. Strickland was an important figure in the early days of the NWMP in the Yukon. He supervised the construction of the Tagish Post in 1897.

After leaving the Yukon he went to the Boer War in South Africa as Adjutant of the 5th Canadian Mounted Rifles. He died at Fort Saskatchewan in 1908 at the age of 40 from cardial dropsy, perhaps something he contracted in Africa.