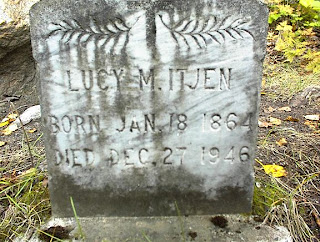 Happy Birthday to Mrs. Martin Itjen, Lucy Pitclaire, born on this day, January 18 1864. Although any story about Lucy involves her husband, here is a bit about her. Martin emigrated from Germany to South Carolina in 1890 and then settled in Jacksonville, Florida to set up and operate a grocery store. In 1898 he decided to follow the tracks of perhaps 100,000 others that year—north to the Klondike gold fields. He was engaged to Lucy at the time, and the idea, as he saw it, was to earn a sizeable nest-egg before returning home. But like the majority of the Klondike tide, he never made it to Dawson; instead, he lingered in Skagway awhile, then joined the Atlin stampede.

He failed in any attempts he made to get rich quick, but the longer he remained in the north country, the more he loved it. He therefore journeyed to Chicago, where he and Lucy were married in 1901, and soon afterwards they returned to Skagway. He worked for the railroad for awhile, but when news broke of the Alsek-Kluane gold strikes, he took Lucy north to seek fortune again. ….Over the years, Itjen engaged in a host of jobs, most of which had nothing to do with tourism including undertaking.

According to letters posted on Martin’s nephew’s website, Lucy “is doing the cooking and maintains the household. She, herself, has several small properties which she leases, and so their life is quite comfortable; not working too hard, even making a little money and getting ahead. She pleaded with him(Martin) to give it up(digging for gold) when he came to visit here during Christmas.”
Another letter stated: “Martin’s wife … is tired now of that lonely life (gold-digging) and plans to remain in town for a while. She has a good home here, and even owns a small hotel and many small properties that she leases, and is thus able to make a good living here.”
Lucy died in Skagway in 1946 and is buried in the Gold Rush Cemetery.