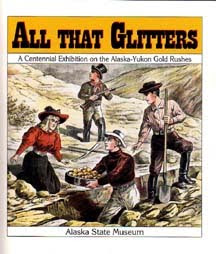 Mr. Churchill was a member of the Skagway Camp of the Arctic Brotherhood in 1898. Born on this day, January 25, 1871 in Montpelier Vermont, he came to Skagway from White Plains New York. He was an engineer, and as such was always looking for a better way to do things. He actually invented a hot water system for thawing frozen gold bearing gravel in the Yukon in 1912.
William L. Churchill’s collection of Alaskan photographs was donated to the State of Alaska Photographic Archives by his grandson, William L. Churchill, in 2006.
The photographs taken by Mr. Churchill depict placer mining, hard rock gold mining and related activities in 1912 and during the Klondike gold rush. Some images document mining engineering practices such as brush retaining walls on streams and thawing of frozen ground to accommodate dredging.
He died in 1936 in White Plains New York.