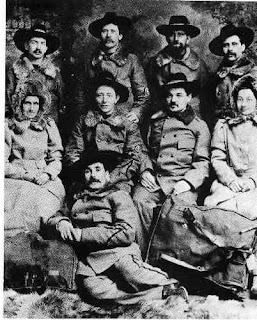 One of the many religious communities in Skagway during the Gold Rush, the Salvation Army had several people working here. The most famous was General Evangeline Cory Booth who was born on Christmas Day 1865 in London to the founder of the Salvation Army, William Booth. The names of some of the others here were:
Lieut. Emma Matilda Aitken (middle row far right)
Adjutant George Dowell (middle row, second from left)
Ensign Rebecca Ellery (middle row, far left)
Captain John Kenny (top row, second from left)
Ensign Thomas James McGill (top row, second from right)and his wife Laura Aikenhead McGill (not pictured)
Ensign Fred Bloss (top row far right)
Ensign Frank Morris (top row first on left)
Captain John Lecocq (front row)
These were members of the 1898 “Klondike Brigade” of nine Salvation Army soldiers, seven men and two women (well actually three if you include Mrs McGill). The “hallelujah lassies” arrived in May 1898 on the Steamer S.S. “Tees” (see yesterday’s blog) at Skagway and then proceeded to Dyea. They climbed the Chilkoot Pass while it was still deep in snow. Included in their outfit were two folding canoes for the river journey, but before the group could use the canoes, they had to cross the rotting ice of Lake Bennett. It took them three weeks to travel from Skagway to Dawson.