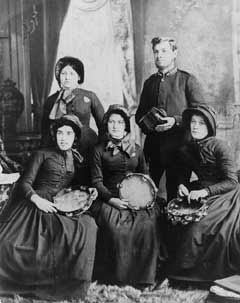 Tom McGill was born in 1863 on the farm in Elma Twp, Perth, Ontario to George McGill, an Irish immigrant and Margaret Sutherland who was of Scottish origin but born in Ontario Canada. It was a large family.
McGill was one of the members of the Klondike Brigade of missionaries sent to the Gold Fields to minister to the miners. He arrived in May 1898 on the steamer S.S. “Tees” to Skagway and then proceeded to Dyea.

He was also later a member of the Yukon Order of Pioneers. He and his wife Laura (who he married in 1899 in Victoria) probably settled in Vancouver since he wrote a book about the founding of the Salvation Army there. He died on this day, February 16, 1950 at the age of 87. The picture above is the Salvation Army in Dawson in 1900. It might be McGill.