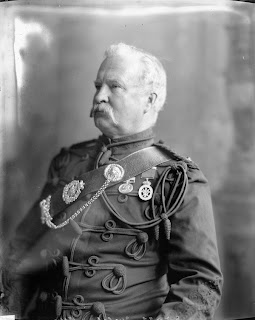 James Morrow Walsh was born in Prescott, Ontario in 1840 to a Welsh-Irish immigrant family. Walsh joined the NWMP in 1873 when it was formed. He was known for his association with Sitting Bull in the 1880’s, and was appointed the first Commissioner of the Yukon Territory and also the Canadian Gold Commissioner of the Yukon in August 1897. He arrived on the S.S. Quadra to Skagway in 1897.

His fame during the Gold Rush was that he was the one who proclaimed that people needed to have 2000 pounds of goods to cross into Canada. Whether he did that for humanitarian reasons to prevent starvation of goldrushers, or whether it was a political decision to make it more difficult for the thousands of stampeders to overwhelm Canada, we do not know. We do know that Mounties were then equipped with gatling guns at the pass to enforce the law. After his decision, he did not serve very long and resigned soon after in 1898. He died on July 25, 1905 at his elaborate home called “Indian Cliff” in Brockville Ontario at the age of 62. According to his obituary he was sick for 10 days, from an “affection of the heart”.

Mount Walsh in Kluane National Park is named after him.