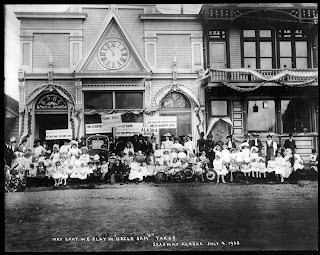 J.G. Price was born on this day, April 4, 1868 in Iowa. He became a lawyer and came to Skagway in August 1898 from Rico, Colorado. He married Maybelle Dent here on February 14, 1899 and later that year had a daughter Alma or Ruth, but she was born in Oregon. They had 4 children altogether: Alma/Ruth, Rachel, John Jr., and William who died in infancy.
John G. Price was a member of the Arctic Brotherhood and wrote “The Arctic Brotherhood” in the Alaska-Yukon Magazine in April 1905. He worked for the Price & Stevens Law firm and was a lobbyist in 1899 to Washington D.C. He retired to Washington state where he died in 1957 on Mercer Island.
According to Ashley at the ArcticBrotherhood blogspot, he was a supporter of “home rule”. Seen above is a demonstration in front of the old Elks Hall (which burned) of folks protesting for “home rule”.

One Reply to “John Garland Price”