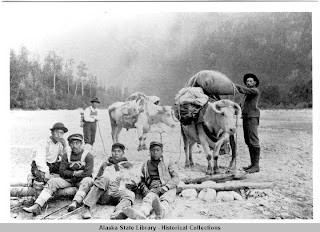 Mr. LaRoche was born in 1853 in Philadelphia, where he learned the trade of photography. He arrived in Seattle just after the great fire of June 1889 to find the city in ashes, but soon opened a gallery. In 1897 he came to Alaska and was one of the photographers of the Gold Rush. Many years later his photos were donated to the State of Alaska Museum and the University of Washington collections where many can be seen online. They document people and places in Dyea, Skagway, Klukwan and Sitka. Seen above is one picture which shows native packers with oxen, possibly in Dyea.
About 1914, he moved his studio to the town of Sedro-Wooley, north of Seattle and retired about 1928. LaRoche died on this day, April 18, 1934 in Seattle.