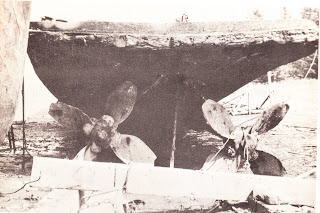 H.R. Foote was born in 1848 in Ireland.
Captain Foote had run the Steamer Danube and later the Steamer Islander. As mentioned before, he was the drunken captain who was asleep when the Islander struck a massive iceberg that had calved off of the Windom Glacier near Taku Inlet. In 1955 when Gordon Newell wrote “SOS North Pacific” he stated that cruise ships in the area would blow their whistles which was all that was needed to “coax the great ice mountain into its sensational act. A frozen mass as tall as a city skyscraper slowly detaches itself from the parent glacier, topples majestically on the brink, then makes its awesome plunge in to the sea, culminating a drama that has been thousands of years in the making.”
So when the ship’s pilot steered the Islander down Lynn Canal in the dark on August 15, 1901, the events were eerily similar to the Titanic’s crash with an iceberg.
I earlier said that all souls were lost but actually only 42 lives were lost. Onboard that day, were 77 first-class passengers, 30 second-class, 5 children too small to need tickets, 3 stowaways, 5 “workaways,” and a crew of 61 totaling 181 souls.
The survivors were picked up after Chief Engineer Brownlee walked up the beach toward Juneau in search of help. He reached the Treadwell Mine where the ship Flossie was docked. One of the casualties of the sinking was Capt. Foote, who purportedly said, “Tell them I tried to beach her,” before he died.

But the story certainly did not end there, for many years the stories of gold being on the sunken ship drew salvagers, but they did not find anything. In 1934 some salvagers raised the rusted hulk and found a bit of gold, but it was only a hundredth of what they hoped for. Above is a picture of the rusted hulk that lay on the beach until 1952 when it was cut up and sold for scrap.