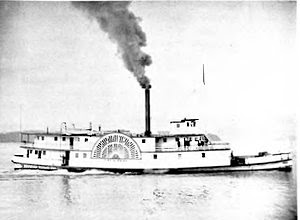 The sidewheeler Idaho was built in 1860 by John J. Holland when he was only 17 years old. Holland went on to build many more steamships.
It is said that the state of Idaho was actually named after this ship!
Anyway, it ran on the Columbia River taking passengers and cargo through the tricky rapids for many years. Captain John McNulty took her up and down the river for many years and made lots of money for the Oregon Steam Navigation Company.
In 1881 she was completely rebuilt with a new hull and paddle wheels at a cost of $20,000. In 1882 she ran the mouth of the Columbia several times before getting through, which was quite a feat at that time. She then made the fastest time up to the Puget Sound ever recorded. She worked various routes in the Sound until 1894 when she was sold to the junk firm of Cohn & Cohn. They removed the machinery and sold her to Dr. Alexander DeSoto. He refitted her as a charitable hospital for the returning gold rushers who were maimed and sick.
After 38 years of work it was fitting that the little Idaho served the poor as a hospital for 11 years. After that she gradually fell apart and became part of the harbor of the growing city of Seattle. There is a plaque there that remembers Dr. DeSoto and the hospital.