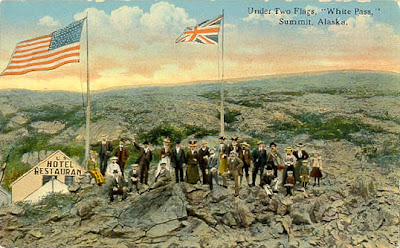 Twenty-year old Jim left England in 1889 and traveled to Orcas Island with his brother Fred where they homesteaded property north of Cascade Lake. In 1891 their mother and four siblings left England to join them on Orcas. The homestead site was sold and the family moved to a farm. Jim and Fred were incredibly bored on the farm and so, when Jim was offered a job in Africa, his mother decided to pack up the family and move to British Columbia. Jim eventually worked in Seattle as an optician, watch repairer, and a lens grinder. In 1897 he traveled to Skagway Alaska. While here, he was quoted as saying that “if you don’t get drunk in Skagway you won’t get rolled”.
He went north to stake his claim but returned to Washington in 1913 after the death of his mother. To earn money he converted many of his photos into hand-tinted postcards and sold them at Templin’s Store in Eastsound, and at Orcas and Deer Harbor stores. Jim sold his Orcas Island home in 1943 and moved to California where he died on July 8, 1953.
The tinted postcard above may be one of his.