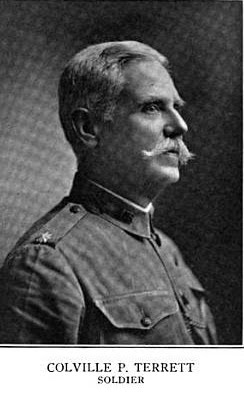 Colville Terrett was born on June 1, 1852 in Washington D.C. His family had a long history of military service going back to the American Revolution. He graduated from law school in 1874 and in 1878 joined the U.S. Signal Corps. He fought in the Apache Campaign and in the Spanish American War where he was recommended for a brevet. He then went to the Philippines. Major Terrett of the 8th Infantry arrived in Skagway in 1903. He stayed until 1904. Going back to Texas, he retired in 1912 and was a charter member of the Santiago Society and the Sons of the American Revolution. He died in Augusta Georgia in 1913.

The National cyclopædia of American biography: being the history …, Volume 16
By George Derby, James Terry White