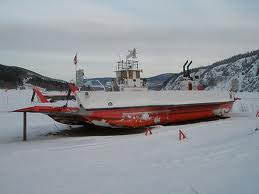 This George Black was not the son of Martha Munger and George Black the Yukon Commissioners. He was born in 1893 in Seattle to Nels and Anna Black who lived in Skagway from 1900 to 1910 and his mother died here in 1941.
George S. Black was the infamous captain of the Superb which sank (see story on April 15, 1911 blog). George started as a clerk and wood sawyer in Skagway but then began his career as ship captain which he did until his death on this day, September 8, 1953 when he was thrown overboard on the Tanana River and drowned.
In Dawson there is a George Black Ferry. This free ferry is run by the Yukon Government. It runs 24 hours daily in the peak summer periods (except for it’s weekly maintenance on Wednesdays from 5 – 7am) across the Yukon River. Depending on the ice, the ferry commences it’s operating season from the third week in May to mid-October. It departs on demand to carry vehicles and passengers across to the public campground and is the only connection to the Top of the World Highway. Seen above is the ferry in winter.