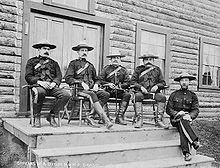 In the RCMP report written by Capt. Steele, he mentions Staff Sergeant James B. Hyles who served in Skagway from August 1897 to May 1898. Steele described it as “one of the most disagreeable detachments in my command. His duties were receiving and forwarding mails and stores, giving information to people entering the Yukon Territory…later working in the pay office at Bennett and discharging the duties of acting Sergeant Major at Tagish.”
Hyles had 15 years of service at that time in the NWMP.