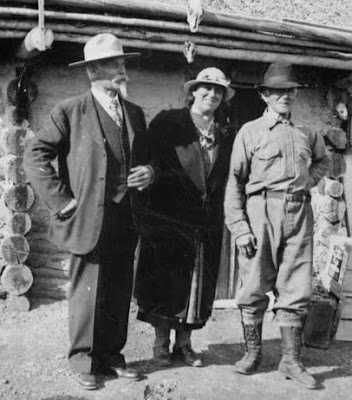 William Yanert was born in 1864 in Prussia, or Poland. He was a cartographer with the 14th Infantry and arrived in Skagway on this day, December 16, 1897 to map things. He left the army and made his way to a remote spot in Alaska in 1901 where he built a cabin and called it Purgatory. When asked why he named it so, he said “It was a hell of a place to live.” It is 45 miles downstream from Beaver, Alaska on the Yukon River. In 1910 his brother, seen with him above, joined him and he lived there for thirty-seven years. During that time he hunted, fished, wrote poetry and created art carvings which he sold to tourists who happened by on steamships up the river. They were entertained by his harmless pranks, his wit and gentle spirit. How many times have you heard people say they just want to go live in a cabin in the woods? Seems he did and enjoyed his life there. He died in 1941 in Portland but was buried in Beaver, Alaska.