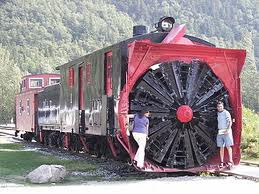 On February 28, 1902 there were two German men pushing a sled north of White Pass along the rail line. The snow was about 3 feet high on each side and apparently one of the men became confused when the train approached and fell in front of the snowplow. The Yukon paper reported his name was Hauser and that he had a wife and kids in Coulee Washington but the Skagway paper reported his name was O. Hauseman and that he had relatives in Oregon. He apparently stayed at the Portland Mizpah Hotel in Skagway before his fateful trip. I could find no record for either name in either Washington or Oregon, so presumably it is screwed up somehow.
Makes you look at that rotary with a little more caution…