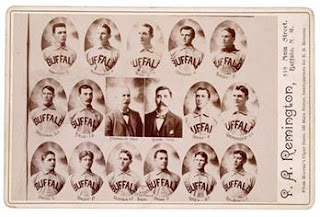 Known as “Jim” Gillespie,  he was born in May 1862 in Buffalo, New York of Scottish immigrant parents. He married and had a hotel in Buffalo called the Hotel Gillespie until 1897.  By 1898 Jim got gold rush fever and came to Skagway where he ran a saloon and stayed at least until the census in 1900. Records show that Mrs. Kate Gillespie ran the Buffalo Hotel Gillespie while he was in Skagway, but here he was married to Belle, so perhaps it was his mother or former wife who stayed in Buffalo.

Jim’s other love was baseball and in 1890 he played for one season for the Buffalo Bisons.

The Buffalo Bisons were a Major League Baseball franchise based in Buffalo, New York.  The team existed for one season,  in 1890 and played in the Players’ League.  In a fun game in 1890 with the single men vs. the married men, Jim was second base man for the married men. The Bisons played their home games at Olympic Park.  Jim played one game in right field for the team.  In that game, he had three at bats without a hit and made three errors in four fielding chances.