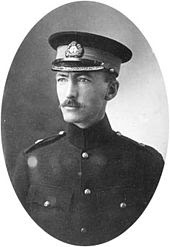 P.C.H. Primrose was born on October 23, 1864 in Nova Scotia. He applied to the newly formed NWMP in 1885 and was commissioned then.

In 1898, at the outbreak of the Klondike Gold Rush, Primrose was assigned to the Yukon, where he was stationed at the H Division in Tagish. He became superintendent of that division in October 1899, then was transferred to become superintendent of the B Division one month later. In 1901, he was posted to Dawson, where he assumed responsibility for 43 Mounted Policemen and 4 other men at the Whitehorse station. During his time in the Yukon, the main role of the police was guarding people awaiting trials and prisoners serving sentences.

Primrose supervised the 1900 Yukon census, reporting to the Commissioner that the territory’s population was 16,463. On May 13, 1900, he fined 31 “members of the sporting fraternity” $55 each, boosting the territorial treasury. Other activities included more community-oriented tasks, such as firefighting when permitted. He returned to Regina in 1914 and worked in many different capacities including being the 5th Lt. Governor of Alberta. He married and had 4 children and died in Edmonton on March 17, 1937.

He is seen above as a young North West Mounted Officer.