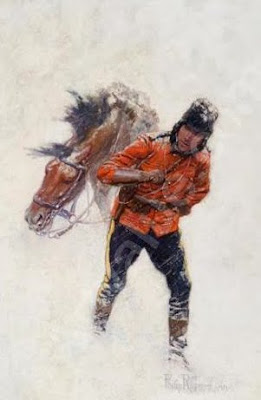 Corporal Ernest Harris signed up for the NWMP in Regina in 1893 and was sent to the post at Tagish on January 10, 1898. After two winters, he went to Skagway on leave in August 1899. It was paradise compared to Tagish. So, he decided he did not want to go back to Tagish. He became ill on March 15, 1900 so Dr. I.H. Moore did an emergency appendectomy on him. Luckily he survived that, but his NWMP Superiors in Tagish were not amused. So they sent Dr. Pare of the NWMP to Skagway to examine him, which he did, and reported that indeed, poor Harris could not travel.

Supt. Steele wanted him declared a deserter on April 6, 1900, but when he received a letter from Dr. Moore, he relented until May 29th when he said that unless Harris went to Tagish he would call him a deserter. On June 30th Harris finally returned to Bennett and Tagish at which time Steele had him examined by Dr. Pare.

So, in June 1900 Z.T. Wood finally declared him a deserter from August 26, 1899 which would prevent him from receiving pay from that time until 1900. What became of poor Harris, we don’t know, but if given the choice of spending another winter at Tagish or in Skagway, one can certainly sympathize.

library and archives Canada on the NWMP personnel records online.