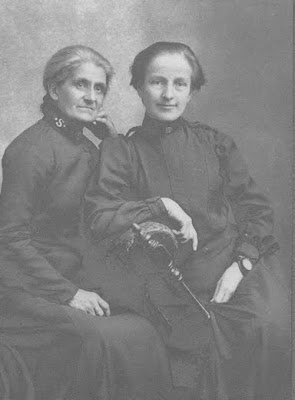 Rebecca Ellery was born in 1858 in Muskoka and Parry Sound, Ontario. From an early age the family was listed in the Canadian Census as “Bible Christian” and later as Salvation Army. Every reference to her trip to the Klondike in 1898 refers to her as an “experienced missionary” (a euphemism for old). The previous picture that I posted of the Yukon Field Force shows her huddled in furs looking quite old, but actually she was only 40 at the time.

The other woman, Laura Aikenhead said in 1945, that the 1898 party had two detachable canoes that they carried over the Chilkoot Pass on their backs. When they put the canoes together at Lake Bennett, they enjoyed paddling up the lakes and rivers. She said it was the most northerly post the Salvation Army ever had.

Anyway, here is a much later photo of Rebecca. She may have gone back home to Ontario to be with family. Note the “S” on her collar for Salvation Army. Laura said she was a staff captain on the trip.