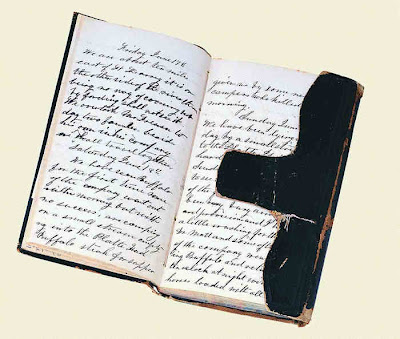 The other day a descendent of T.J. stopped in here to my office and gave me a copy of his ancestor’s diary.

T.J.Jessop had started from Australia in late 1897 and after several adventures wrote this about Skagway:

“I will revert to Skagway it was a very lawless city and was terrorised by a notorious gang of criminals, the chief was known as “Soapy Smith”, He was very amiable and meek in his manner and very like a parson in more ways than one, and very deceiving in every way.

Several Aussies were forcibly robbed by the gang. Members of the gang would turn up by boat from Vancouver and of course they, or some of them, would play “Two Up” and the gang took particular notice of those who had plenty of money, and on arrival at Skagway would introduce them to members of the gang. They would then propose to show them Indian Totem Poles and rain gods (which were mythical) and when a secluded spot was reached would forcibly rob them. The robbed would appeal to the Marshall (he was in charge of the soldiers) no police and he would just laugh at them at being caught as there were hoardings everywhere containing warnings.

In Vancouver and Skagway really there was no excuse at being caught. The gang even went as far as to establish information bureaus (which were bogus), but on entering these places there was always some form of gambling going on and if the entrant did not join in, they cut his gold belt off from around his waist.

I read this after I came back to Australia that a man named Reid was in Soapy’s gambling den when a dispute arose and Reid got the drop on Soapy. There were not many members of the gang present and he was bluffed, and it preyed so heavily on his mind that next day he was seen making for the jetty with a gun in his hand. Reid was an engineer and was supervising repairs or extension to the jetty. He saw Soapy coming and both fired at the same time. Reid was shot through a wrist and Soapy was shot dead. The gang then became disorganised and the townspeople rounded them up and put them in a steamer and sent them down to the “States”. (U.S.A.)”

An interesting take on the Soapy-Reid gun battle!