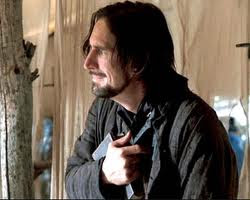 Despite the stories of murder, prostitution and robbery, there were also quite a few religious centers in Skagway in the 1890’s. Here is a list:

Rev.’s Jorden, Latourette, and Clevinger of the Baptist Church

Rev.’s Leach and Yokum of the American Episcopal

I have found no reference to synagogues or Buddhist centers, but who knows?

Hope I haven’t missed any! I have written blogs on several people, but some disappear after the gold rush. I am reminded of Ray McKinnon’s wonderful portrayal of the real Rev. Henry Smith in the HBO series Deadwood, seen above. 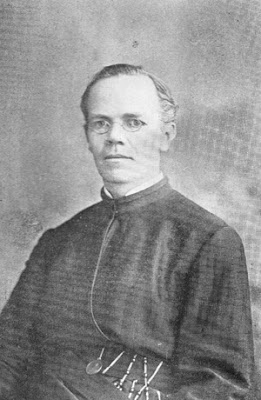 William Henry Judge was born into a religious family in Baltimore, Maryland, April 28, 1850. In addition to William, four of his siblings also entered Holy orders.

As a youth, he was frail and sickly, but he survived, and at age 25, he embarked on years of study and teaching, in the Jesuit order. At the age of 40, in 1890, he volunteered for service in Alaska.

After a lengthy journey which lasted several months, he arrived at Holy Cross Mission, the principal Jesuit centre on the Yukon River, where he joined the Father Superior, two brothers, and three Sisters of St. Ann, who taught fifty resident school children.

Judge had acquired many useful skills before he became a priest: carpenter, cabinet-maker, blacksmith and baker. Later, at Nulato he spent his time teaching native children in their own language, constructing a church, and travelling widely to visit both whites and natives in a large region. Here he had established himself happily and was content with his assignment. From there he was sent to the small mining town of Forty Mile, hundreds of miles up the Yukon River from Nulato.

His fortitude was tested at Forty Mile, where he alone served the spiritual needs of the Catholic community. Father Judge noted: “…everybody is looking for gold, some finding it and some getting nothing, a few becoming rich, but the greater number only making a living, and all working very, very hard. You would be astonished to see the amount of hard work that men do here in the hope of finding gold… Oh if men would only work for the kingdom of heaven with a little of that wonderful energy, how many saints we would have.”

In March 1897, Father Judge went to Dawson and secured 3 acres of land near the north end of town. Once he was settled there, he set about building a church, a residence, and a hospital. The hospital was completed August 20th, 1897.

With harsh climate, poor nutrition and deplorable sanitation conditions in the new town, the hospital was in immediate demand. He was soon tending to 20 patients a day, which rose to 50 during the winter, then, with the influx of humanity and typhoid epidemic in the fall of 1898, 135 patients daily. This dramatic increase made necessary the construction of an addition to the hospital.
For two years, he worked without thought or concern for himself, devoted solely to the care of others. Worn out and exhausted by his own labors, in early January of 1899, he fell ill and for days battled pneumonia, finally succumbing at the age of 52, on January 16 1899.

When Father Judge died, the sadness was shared by the entire community, regardless of religious persuasion. His contributions to the community were widely recognized, as was his spiritual work. He was indeed a hero of the Klondike and is known as the “Saint of Dawson.”

At the north end of Dawson today you will find a quiet clearing overlooking the Yukon River near where his great works were performed. It is here that his grave is found, and nearby, a plaque, mounted on a huge block of stone by the people of Canada, which recognizes his contribution to the physical and spiritual well-being of the miners.

Michael Gates in an article for the City of Dawson history webpage; Pierre Berton; Charles Judge: An American Missionary – A record of the work of the Rev. William A. Judge, S.J. Catholic foreign Missionary Society, Ossining, NY; Mills. 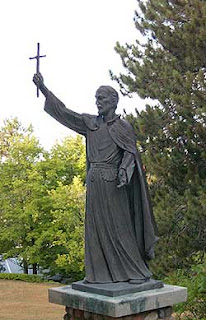 Pascal Tosi was born on April 25, 1837 in Santarcangelo di Romagna, Italy. He was one of the first two Jesuits missionaries to set foot in Alaska. As the first Superior of Jesuits in Alaska (from 1886 to 1897) he is regarded as the founder and organizer of the Church in North-Alaska.

Ordained a (diocesan) priest in 1861, Tosi entered the Jesuits the following year in order to be sent to the ‘American mission’. In 1865 he arrived in the United States to serve on the Rocky Mountain Mission. For two decades he proved to be an able missionary to the Indigenous Peoples of the American Northwest.

When in 1886 Archbishop Charles John Seghers set out for northern Alaska on what was meant to be a reconnaissance expedition, he had with him as travelling companions Pascal Tosi and French Jesuit, Louis Robaut. The two were supposed to stay with the archbishop only on a temporary basis. The Jesuits had no intentions at the time of opening a new field of missionary activity in Alaska. However, the murder of Archbishop Seghers (November 1886) changed the situation, and their thinking on the matter. (see my earlier blog on Bishop Seghers)

Tosi and Robaut spent the winter of 1886-87 in Canada at the confluence of the Yukon and Stewart Rivers. When in early 1887, upon entering Alaska, they learned of the death of Archbishop Seghers, Tosi considered himself to be in charge, at least for the time being, of ecclesiastical affairs in Alaska. The following summer he made a trip to the Pacific Northwest to consult with the Superior of the Rocky Mountain Mission, Joseph M. Cataldo, who formally appointed him Superior of the Alaska Mission and entrusted him with the task of developing that mission.

In 1892, he made a trip to Rome. There Pope Leo XIII, moved by Fr. Tosi’s account of the state of the mission in Alaska, told him in their native Italian, Andate, fate voi da papa in quelle regione! (“Go and make yourself the Pope in those regions!”).

On July 27, 1894, the Holy See separated Alaska from the Diocese of Vancouver Island and made it a Prefecture Apostolic with Tosi as its Apostolic Prefect.

By 1897, Tosi was physically worn out by a tough daily life and strenuous labors in an extreme climate. He was succeeded both as Superior of the Alaska Mission and as Prefect Apostolic in March of that year by French Jesuit Jean-Baptiste René (1841-1916). From St. Michael, on September 13, 1897, Tosi sailed, reluctantly, for he hoped to stay on in northern Alaska, for what turned out to be a brief retirement in Juneau. As the ship left the harbor, a salute of four guns was ordered as a manifestation of the universal esteem in which he was held.

Tosi died in Juneau on this day, January 14, 1898 and is buried in the Evergreen Cemetery under the false name of Father Tozier. 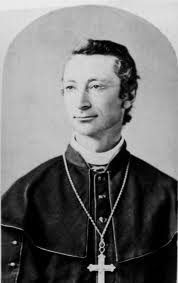 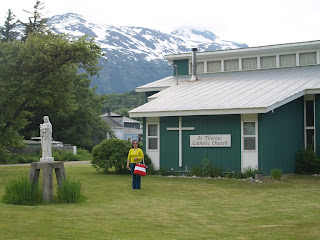 Young Father (later Monsignor) George Edgar Gallant, became the first priest ordained in Alaska on March 30, 1918. He came to Skagway in 1921 and built a new church and school here, which were named for Saint Theresa of the Child Jesus.
In 1931, Monsignor Gallant would establish Saint Pius X Mission Home for Native children who were either orphans or from destitute families, staffed by the Sisters of Saint Ann. It would be rebuilt in 1946, and would operate until the 1960s. Father Gallant stayed in Skagway until about 1929.
He was a Redemptorist Oblate and quite instrumental in encouraging and promoting the Redemptorists to establish a foundation in Alaska. He was a great devotee of Our Mother of Perpetual Help Devotions.
Monsignor Gallant died on this day, August 4, 1931 back in PEI, Canada.
The church above is St Theresa’s on State Street and 9th Avenue, services on weekends year round. 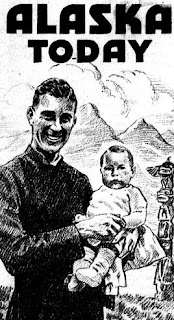 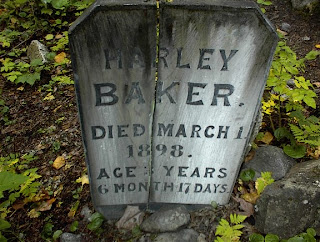