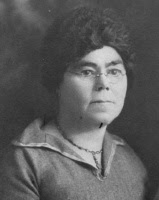 Wilson was a very early businessman in Dyea. He and Healy ran a trading post in the 1880’s. Wilson was born in 1842 and was married to Katherine or Kittie Brown and had a 6 year old son and girls Gladys and Ethyl, newborns, when he died, on this day, May 20, 1895 in Juneau. Kittie and family stayed on at least until 1900 and then must have moved on.
Seen above is the Healy and Wilson trading post as photographed by Anton Vogee on Decoration Day (Memorial Day) 1898.