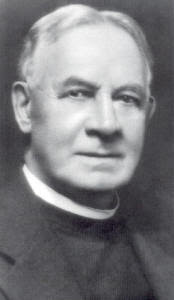 John Earnest Southerland or Sutherland died on this day, April 6, 1898 in the Bishop Rowe Hospital. Although we do not know how he died, it was most probably again from meningitis. He was born in New Zealand, perhaps Otago, in 1874, so he was only 24 when he passed away and was buried in the Gold Rush Cemetery.

A few days later, on April 15, 1898 a letter from the Right Reverend Peter Rowe, Bishop of Alaska was received in New York. In it he described the desperate situation in Skagway and the need for the hospital:

“…the people of Skaguay have been forced to start an emergency hospital. The need of it beggars description. It has relieved many cases of great distress. The people have responded to appeals to their humanity nobly. Impressed with the importance of the institution, representatives of the public have asked me to take charge of it, and I have done so. They have transferred it all into our hands.

“The emergency hospital is a low cabin 30 feet long and 18 feet wide. One room on the ground floor answers for kitchen and cots; one room above is but half-story or attic. In this room I found 12 cots, and 10 of them were occupied with men in all stages of pneumonia and meningitis. Yesterday while visiting it a young man was brought in from the summit, 18 miles, on a sled, tied on to keep him from falling off, having been dragged over rocks and through mud all that distance.

“Last night I was with a young man who died in my arms, from New Brunswick, telling me what to say to his father and mother and sisters. It was most sad, most pitiful. Sickness is ging to increase. The appeals to our humanity cannot be ignored. The sick are absolutely friendless, helpless, and without the hospital would simply die by the wayside. We have one woman nurse, two men, and a cook. Skaguay doctors are attending for little or nothing as expenses permit. We must build an addition if only of an inexpensive and temporary character.

“I am going to begin this immediately. Present accommodations are totally inadequate and unsuitable. We have assumed great responsibility.”
The author of this letter, Peter Trimble Rowe is pictured above.

One Reply to “Bishop Rowe Hospital”