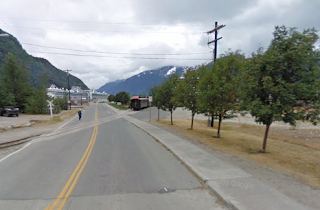 Harry was born in Washington the youngest son to Charles and Joanna Ask who were from Norway and had lived in Minnesota and Washington. Charles and Joanna came to Skagway in the gold rush about 1898 and stayed for many years running a mercantile and grocery store: “Ask and sons General Merchandise”. The store was still running in the 1930’s.
Harry was born on this day, May 8, 1894 and was only 4 when he came to Skagway with his family.
I have seen his name on one of the little plaques under the Mountain Ash trees that were planted along Broadway several years ago. How those little trees survive is a mystery to me, but then how people survived here for decades is as much a mystery. I believe that the family all moved back to Washington in the 1930’s.
The photo above is from Broadway looking south at the harbor. The trees on the right are the commemorative trees, Harry Ask’s is one of these.