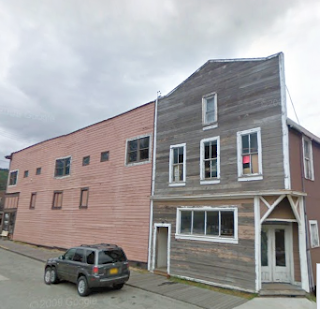 John Williams was probably not his real name, since he was born in 1870 in Russia and came to Skagway shortly after the Gold Rush. He managed the St James Hotel for decades.
The St James Hotel is famous for a meeting which occurred between Michael J. Heney and the scouts sent from British investors to determine if the building of the railroad was possible. Despite the story that they came to agreement based on Heney’s influence, there had actually been years of scouting, measuring and evaluations on the project by the British. In the book “The White Pass” Minter spends chapters – at least 1/4 of the very large book describing those years of efforts.
No, the investors saw in Heney someone who had the determination and on-hands experience to carry the project of building the White Pass & Yukon Route Railroad to completion.
Back to John Williams, he lived in Skagway until he died on this day, May 9, 1938 and is buried in the Pioneer Cemetery. Pictured above is the St James Hotel that sits adjacent to and just behind the Skagway Hardware Store on 4th Avenue.