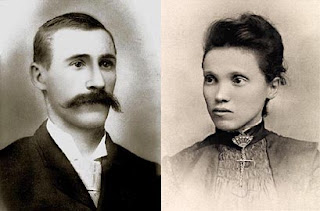 Robert Banks was born June 11, 1858 in Windom Minnesota, the 17th child of 21 from his father James Monroe Banks born in 1792 in Pennsylvania.

Banks is mostly famous for drowning in Lynn Canal when the Clara Nevada blew up upon leaving Skagway on February 5, 1898.
Robert Bruce Banks was about 40 when he died and he was trying to find work in Skagway as a woodcutter. His wife Josephine and their 6 children ages 2 through 16, waited for him to return in the Bellingham area. Here is the last letter he wrote to his family three days before he boarded the Clara Nevada:

Skagway Feb. 2,1898
Dear Josie,
I sent out a letter Monday on S.S. Noyo but we hear she is on a rock between here and Juno. I had hired out then to go on the wagon road to work but when I got out there they said they already had too many men. There are ten carpenters for every days work here. The weather has been very cold and windy for 4 days. We are very healthy,, but I did not come here for health or poverty. Had plenty of that before. Wood cutting is $2. per cord now, and buck our own timber, pay uncertain. In fact pay here is generally uncertain. I have not had a line from you to date except letter in Seattle. Unless something good turns up soon, I will return to Seattle. I can earn a little money there before spring. Alki is expected Friday, then I surely shall hear from you and return on her unless things look better.
With much lonesomeness
R B Banks

Letter one of many and Photo above is courtesy of family on genforum and rootsweb.

One Reply to “Robert Bruce Banks”