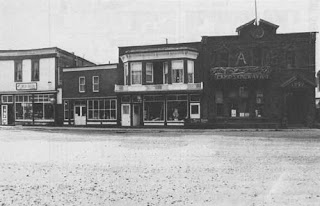 George Rapuzzi and his wife Teresa Maria came here from Seattle in the Gold Rush. They were both born in Genoa Italy, George in 1857 and Teresa in 1867 but had come to Minnesota in the 1880’s.
When they arrived here in Skagway they started several businesses including the Washington Fruit and Candy Store (located above between the Red Onion and AB hall), a cigar store, a grocery store, and the California Wine House. They and their children and grandchildren stayed here for decades. His sons George and Louis both worked as U.S. Marshals.

George died on this day, June 10, 1926 and is buried in the Skagway Pioneer Cemetery. His wife Teresa died in 1941 and is buried next to him.

In the past two years the “Rapuzzi Collection” was acquired by the Rasmuson Foundation and donated to the Municipality of Skagway which has in turn given parts and some properties to the National Park. Originally thought to be over 450,000 items, the actual number of items now numbers about 3,000. Hmmm. It sure would be nice to actually see some of these items before they are described and locked away in the city and park archives-far from the menacing crowd.