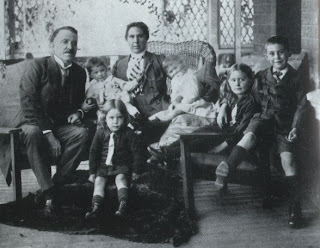 “Over six feet tall with a mighty stutter and matching temper.”

George Herbert Kingswell was born on this day, July 20, in 1867, the last of ten children, in Kew, Invercargill, New Zealand. His father was both a very successful sheep farmer and equally successful business man with interests in fellomongery, local rail, and property development. But George was a wanderer and traveled the world (Australia, Hong Kong, San Francisco, Alaska and South Africa) as a reporter for various newspapers. His life is so extensive that books have been written about him.

As a freelance mining correspondent for the Australian Press he went chasing the gold rush in Klondyke Alaska. Reaching Dyea Alaska in August 1897. To support himself as a journalist he took to trading fur coats. By mid-1898 he was back as editor of the Coolgardie Miner in Western Australia. He died in 1931 in Capetown South Africa. The picture above was taken in 1915 of his family in South Africa.

One Reply to “George Herbert Kingswell”