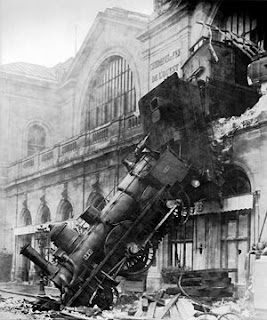 Henry was born in 1844 in Germany. He shows up in the 1881 census as a miner in the Cassiar District, and then he came to Skagway and worked on the railroad. Unfortunately he got caught between cars and was crushed to death on this day, November 7, 1901 and is buried in the Gold Rush Cemetery. Another White Pass fatality.
Seen above is a great photo of a train accident, though not from Skagway.