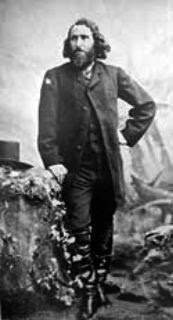 Ed Schieffelin was born on this day, November 8, 1847 in Tioga County, Pennsylvania. Although he did not come to the Yukon through Skagway, he is significant because he came to Alaska to prospect in 1882-it was the first significant investment made in Yukon mining.
He was a hardrock miner who had become a multi-millionaire in Arizona. In 1881 he and his brother Eff had sold their Tombstone claims and headed to San Francisco where they purchased the steamboat “New Racket”. He chartered a schooner there and put three years of supplies and lashed the “New Racket” to the deck. He then took it to St. Michael where they took it up the Tanana and built a winter cabin. After prospecting for awhile they did find some gold but not a bonanza and the winter weather discouraged them. They sold their boat to McQueston, Harper and Mayo and returned south.

Not one to stay in one place too long, Ed traveled to Oregon to search the hills for yet another claim. In May 1897, a neighboring prospector found him lying dead in his cabin. Although he always looked much older in appearance, Ed Schieffelin was only 49 years old. The coroner reported Schiefflin died of heart failure.
He was originally buried near the cabin in Oregon. But, when his wife went through his paperwork and will, she found another request he wished to have fulfilled. “It is my wish, if convenient, to be buried in the dress of a prospector, my old pick and canteen with me, on top of the granite hills about three miles westerly from the city of Tombstone Arizona, and a monument, such as prospectors build when locating a mining claim, be built over my graveyard or cemetery.”

The mayor of Tombstone made the arrangements and Ed Schieffelin was finally laid to rest in his beloved Tombstone on Sunday, May 23, 1897. His wife, mother, brother and a large crowd of friends attended the service. He was buried wearing his old red, flannel shirt and faded prospector’s clothes. Beside him they placed his pick, shovel, and the old canteen he had with him on the day he found his silver claim.
He is buried outside Tombstone, the city he founded in 1877.