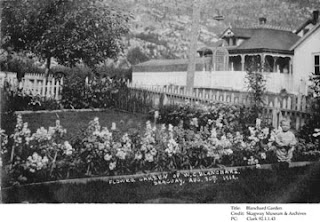 Herman was born in 1865 in Denmark. He ran the Seattle Saloon on the northwest corner of 6th and State Street known as “the Gentleman’s Saloon”. Grimm stood for no nonsense. “No women, no gambling, no trouble,” was his motto. On January 22, 1904, when Army deserter Jeff Halloway, “a drunken roysterer (sic)” and “flourishing a revolver,” caused some trouble at the Seattle, Herman personally ushered him out the back door. He also owned the Pack Train Bar.

Grimm built a house in 1898 at the northwest corner of 6th Avenue and Alaska (or Holly and Ivy on original street maps). The present owner has been remodeling and meticulously restoring it over the past 9 years. It features a “widow’s walk,” hipped roof, bay windows, gable roof dormers, and barge boards over the porch. Past additions to the rear and a rock fireplace have been removed, and the house was raised. Property records show that the property sold for $150 in 1898. In 1902 he had a garden, 50 feet by 100 feet where he raised strawberries, cabbage, cauliflower, kale, carrots, celery, parsley, peas, beans, lettuce, spinach, rhubarb and potatoes. He also had cherry and apple trees. The garden was one of the federal government’s experimental stations. Seen above is his neighbor’s garden with the Grimm house in the back.

Herman Grimm died on this day, March 30, 1928 and is buried in the Pioneer Cemetery.