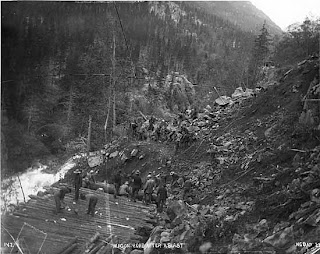 On December 2, 1898 there was a premature explosion on the White Pass & Yukon Route Railroad line between Camps 9 and 10. Three men were charging a hole when the explosion occurred. Charles Watson, John Hapin and John McGubbin or McCubbin were killed. McGubbin was buried in the Gold Rush Cemetery, there is no record of what became of Hapin and Watson. Although the headboard there says McCubbin, it was one that was replaced in the 1970’s and so is not 100% reliable, it could be either as there was a John McGubbin and several John McCubbins in the late 1800’s.
The photo above is of a blast on the line where the rubble is partially covering the Brackett Road. The railroad line later went over the Brackett Road.