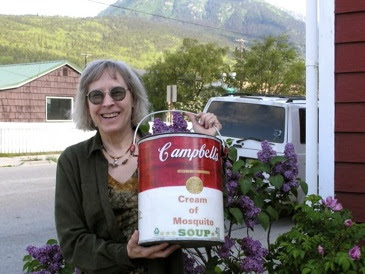 Mr. Dedman was born in 1858 in Missouri and came to Skagway from Portland. He first started a laundry here in 1898. His wife, Clara, joined him several months after his arrival. She landed two days after Soapy Smith was shot. They purchased a two story mercantile building, moved it from State Street to Broadway and turned it into the Golden North Hotel in 1907. They had two kids, Henry Alaska and Nelda. Henry got into photography early on and the Dedman’s store is still in business on Broadway in the summer. His granddaughter and great granddaughter still live in Skagway year round and also have a store on State Street called Granny’s Gallery.
George died on this day June 27, 1925 in Skagway and is buried in the Pioneer Cemetery with Clara, Henry and his wife Bessie.
Seen above is Betsy acting goofy in front of Granny’s Gallery.

One Reply to “George R. Dedman”