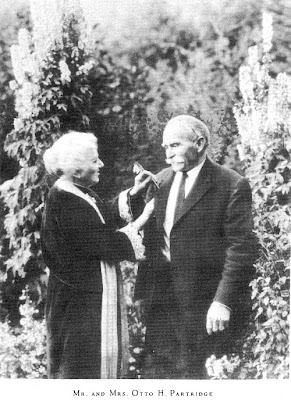 Otto was born in 1857 on the Isle of Man. He emigrated from England to San Francisco. In 1897, he heard the stories of men walking off ships in San Francisco with suitcases full of gold from the Yukon gold fields. He had boat building skills that would be valuable in the north so at age 42 he set off for Skagway, Alaska.
He is said to have smuggled $20,000 to Lake Bennett in a bale of oakum.

Otto crossed the Chilkoot Pass and traveled to Bennett, British Columbia. Bennett was the start of the lake and river system that led to Dawson City. Here he worked as general manager for the Bennett Lake and Klondike Navigation Company. With the extension of the White Pass & Yukon Route railway to Whitehorse in 1900, Otto moved to Milhaven Bay on Bennett Lake near Carcross where he set up a sawmill and supplied railroad ties to the WP&YR. His wife Kate joined him here. They lived on a houseboat and Kate spent her time cultivating flower and vegetable gardens which flourished in the intense northern sunlight.
Otto’s sawmill closed shortly after the end of the gold rush and he turned his interest to mining. In 1911, he started a mining operation in partnership with Stanley McLellan and Lugwig Swanson. He called the mine Ben-My-Chree. The name in Manx spoken on the Isle of Man, translates to “girl of my heart”, and was a tribute to Kate. The small mine employed up to sixty men, but was short-lived as an avalanche roared down the mountain burying the mine and tragically killing Stanley McLellan and his wife.
After the accident, the Partridges stopped mining and built a homestead, also named Ben-My-Chree, in the spectacular wilderness valley just 106 km south of the Yukon border. In the rich glacial silt they cultivated two acres of formal flower gardens in this most unlikely setting. Forty varieties of flowers flourished here and grew to amazing heights. The delphiniums were ten feet high, the pansies and poppies were five inches in diameter.
In 1912, sternwheelers began stopping at Ben-My-Chree to bring mail and supplies and to stock up on fresh vegetables from the Partridge’s garden.
In 1916, Otto entered into an agreement with the British Yukon Navigation Company to bring tourists down the lake from Carcross to visit the gardens. Word quickly spread and soon steamers carried 9,000 passengers annually to Ben-My-Chree. The scenery at Ben-My-Chree entranced visitors. The combination of towering snowcapped mountains, the rushing glacial river, the long white sandy delta, the turquoise lake, and the incredible gardens were breathtaking.
A houseboy received visitors at the dock while Kate, dressed in long formal wear, welcomed visitors at the garden gate. In the drawing room, Kate entertained with organ music. Otto conducted tours of the gardens and, a gifted storyteller, he captivated his audiences with stories from the gold rush days.
During the 1920’s Ben-My-Chree was considered a key place to visit among the social elite of that time period. Many wealthy people including the Prince of Wales, President Roosevelt, Lord and Lady Byng, and numerous silent picture movie stars made the long trip.
Otto died at age 73 on this day, June 28, 1930 and Kate a few months later at the age of 77. They are buried in the Whitehorse Pioneer Cemetery.
They are pictured above.

Martinsen Trail to North Star Gold; What Lies Beneath website for the Whitehorse Cemetery.