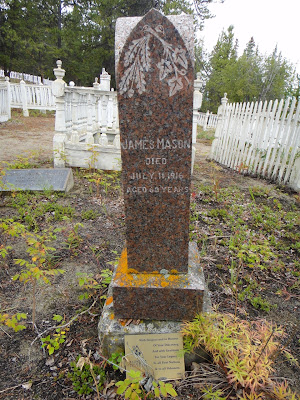 He is credited as the co-discoverer of the gold find at Bonanza Creek that unleashed the Klondike Gold Rush.

Keish meant “Lone Wolf” but he was dubbed “Skookum (the Chinook term for strong) Jim” for his feat of carrying 156 pounds of bacon over the pass in a single trip. In 1887 Skookum Jim Mason guided Captain Moore over a secret pass, an easier route to the interior that would later be named White Pass.

Skookum Jim built a large house for his wife and daughter in Carcross where he spent his winters hunting and trapping, and each spring he returned to the Klondike. Highly regarded by his people, Skookum Jim was known as a generous family man. He had the foresight to place what remained of his fortune in trust, and when he died in 1916 he left a substantial sum in trust for the benefit of Yukon Indians. For his role, Skookum Jim Mason was designated a Person of National Historic Significance and he is an inductee in the Canadian Mining Hall of Fame.

He died in 1916 of a kidney ailment and is buried in the Carcross Cemetery.