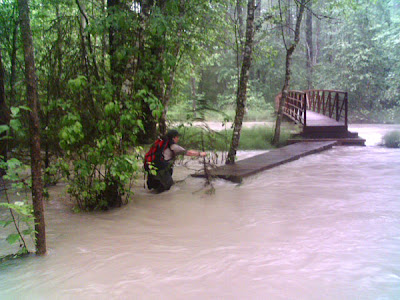 It has been raining off and on for several days here in Skagway. Grrrrrrr! So we check the River gauge to see if it will reach flood stage:

When I worked at White Pass I saw in the vault a very old map of town that showed the areas that flooded in 1912, I think. I saw that the creek overflowed and so did the Skagway River, but there were certain houses that did not flood. It was then that the river took out part of the Gold Rush Cemetery. Many graves were washed away and people did not replace the headstones or headboards. When you look at it today you will see a definite earthen bench where it is nearest the railroad tracks. I believe that in that section there were more babies buried, as I know of one, whose descendant in town here told me about. The other graves in that lower section are of babies, so that is my conjecture.