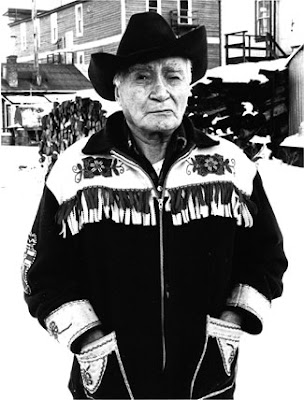 Happy Birthday to Johnnie Johns who was born in the midst of the Gold Rush at Tagish on this day, July 10, 1898. He was the eldest son of Maria and Tagish Johns and was a member of the Crow clan of the Deishheetaan tribe. His Tlingit name was Yeil Shaan, which means Old Crow.

During his lifetime, his contributions towards the development of the Yukon were numerous. At the age of 19, he started his own guiding outfit. During his time as an outfitter he was known as one of the top ten guides in the world. As a life-long trapper and fisherman, these talents were second to none. He helped blaze the way for the construction of the Alaska Highway.

He was one of Yukon’s best gems and most widely respected elders, who generated warmth and kindness. His domain was the outdoors and all it had to offer. He sang, drummed and danced the stars to bed.

from A CKRW Yukon Nugget by Les McLaughlin