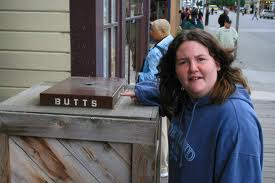 So, on Thursday we had an election to decide whether to ban smoking in Skagway. It passed overwhelmingly as similar such elections have passed in other Alaskan towns. More people turned out to vote than in any other past election to anyone’s memory. So, now you cannot smoke in buildings that employ people or in any government facility, or within ten feet of any doorway or window of such. You can still smoke in your car or in the privacy of your home. So far “No Smoking” signs have not popped up, but they will I’m sure. The city’s trash cans still have little ashtrays on top labeled “Butts” which I always thought just encouraged people to stand next to them and light up. In case you wondered, yes, there have been little fires that have started on and under the boardwalks and in the flower planter boxes. So perhaps this will prevent any fires in downtown.